Showing posts from January, 2018
Show All

The much-anticipated IPL auction of this year is just a handful of days away from the real world now. It will be that time of the year when the soi-disant demigods of the game will be up for sale. The celebrated names on the cricket field will be hawked across the eight franchises and depending upon their needs, demands and budget, these franchises will build a team by luxuriating in some money-spinning deals. The reason why this year's auction is a hot topic is because it is going to be a mega auction which will see a significant revamp in the structure of almost all teams. The two-day auction is likely to be a witness to numerous startling decisions. The Indian Premier League is at a level now where a lot of things have to be kept in mind before taking a decision for there are other facets involved which are far away from the competition between the bat and the ball. A commercialised event, as it has been for some years, a lot of pondering goes behind the development of the
1 comment
Read more

What is lost is not just a series 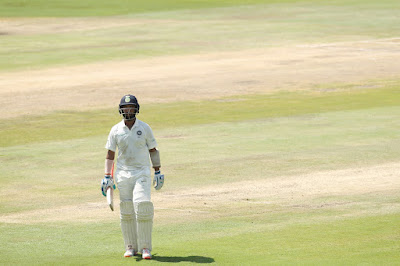 There were theories regarding this Indian Test team being the best so far to compete in and against South Africa. There were talks as to how each player of the current lot understands his role and responsibility in the team. There was confidence to the extent that the idea of playing a warm-up match was shelved.  But within a span of 13 days, things have changed. Well, the results have forced us to think likewise for what is lost is not just a series, but, an aspiration. An aspiration to continue the current form  in overseas conditions and the greater aspiration of winning a Test series in South Africa. Selection conundrums? Plenty! They were, they are and they will remain until and unless they are worked upon. Be it the openers, the middle-order or the wicket-keeper, there is no set procedure at the moment. India were banking heavily on Murali Vijay (69 runs in two matches at an average of 17.25) and Cheteshwar Pujara (49 runs in two matches at an average of 12.25) before the ser
Post a comment
Read more
More posts